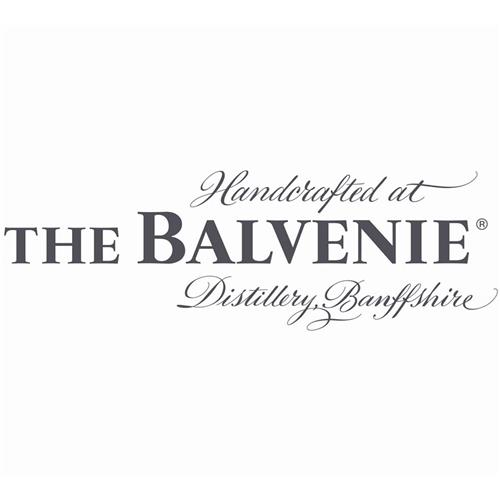 Thanks to natural alchemy and centuries-old craftsmanship, The Balvenie is unique among single malts. Balvenie's whisky-making process is dedicated to maintaining the Five Rare Crafts and are the only distillery in Scotland that still grows its own barley, uses traditional floor maltings and keeps both a coppersmith and a team of coopers on site. 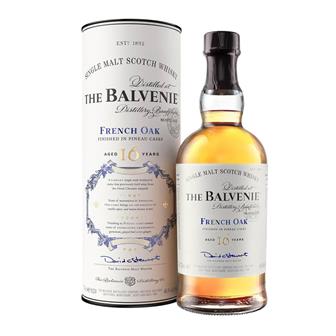 Balvenie 16 Year Old French Oak Pineau Cask Single Malt Whisky 70cl
The Balvenie French Oak is a vibrant single malt finished in casks previously held wine from the French Charentes vineyards. Pineau des Charentes is a fortified wine made from unfermented grape juice, to which a Cognac eau-de-vie is added and then... 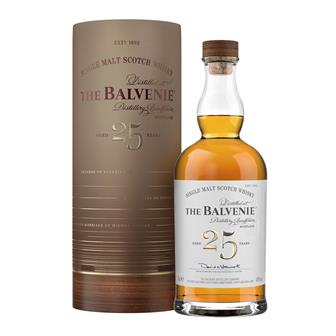 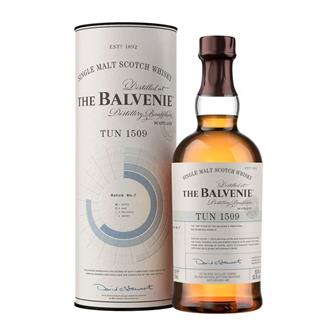 Balvenie Tun 1509 Batch No.7 70cl
This is the seventh batch of Balvenie's Tun 1509 release. This whisky has been bottled from 21 casks (10 Sherry butts, 4 barrels and 7 hogsheads), hand selected by David Stewart and then vatted together in a marrying tun for 3 months. The result is a eleg 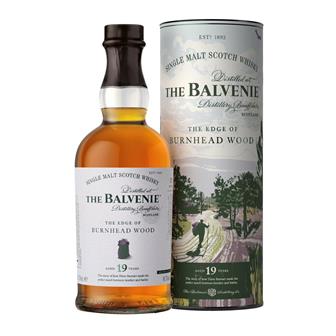 Balvenie 'The Sweet Toast of American Oak' 12 Year Old 70cl
The story being spectacular things that can happen when ancient techniques meet fresh new innovative ideas. "Some would call us 'aff our heads', but I suppose you've got to try something really different now and again," explained Mashman B 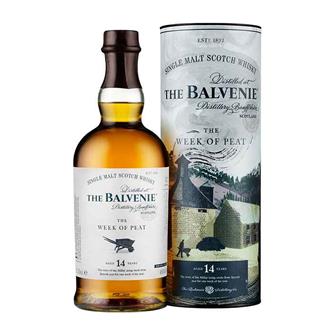 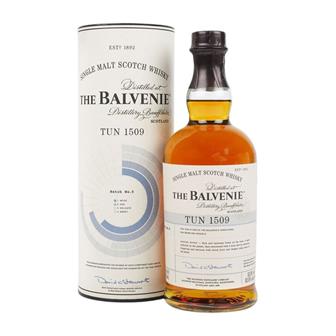 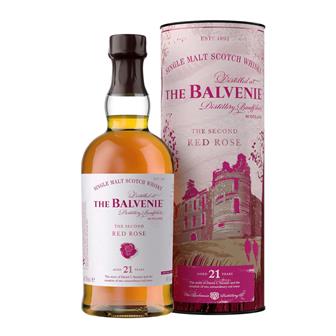 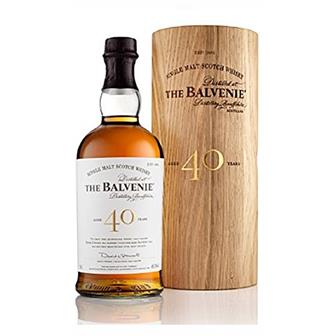 Balvenie 40 Year Old Single Malt Whisky 48.5% 70cl
This is one of the oldest regular releases from Balvenie at 40 years old. Matured in a combination of sherry and bourbon wood it has a rich intense nose of fruit cake with vanilla, dried apricots, citrus and ginger. The palate has orange blossom and ho... 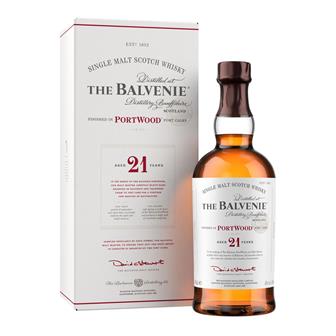 Balvenie Portwood 21 Year Old Single Malt 70cl
To create The Balvenie PortWood Aged 21 Years, a marriage of rare Balvenie is transferred to port casks, or pipes, which have held fine port wines. Here it is sampled regularly by The Balvenie Malt Master to ensure that just the right amount of charact...

Balvenie Double Wood 12 Year Old 70cl
The Balvenie DoubleWood is a 12 year old single malt which gains its distinctive character from being matured in two woods. Over its period of maturation it is transferred from a traditional oak whisky cask to a first fill European oak sherry cask. Eac... 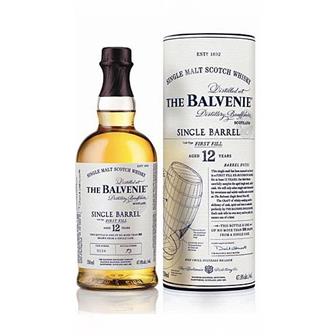 Balvenie 12 Year Old Single Barrel 70cl
A new bottling from this popular Speyside distiller, this Single barrel has spent 12 years in first fill bourobon cask. Head distiller David Stewart then tastes each of the cask and only selects casks which offer sweetness and vanilla characters to be...

Balvenie Carribbean Cask 14 Year Old Single Malt Whisky 70cl
Balvenie's newest edition to the range is a limited edition Carribbean Rum finish. This whisky has had a 14 year maturation in traditional oak, before being transferred to casks that previously held Caribbean rum to finish its aging process.
The ... 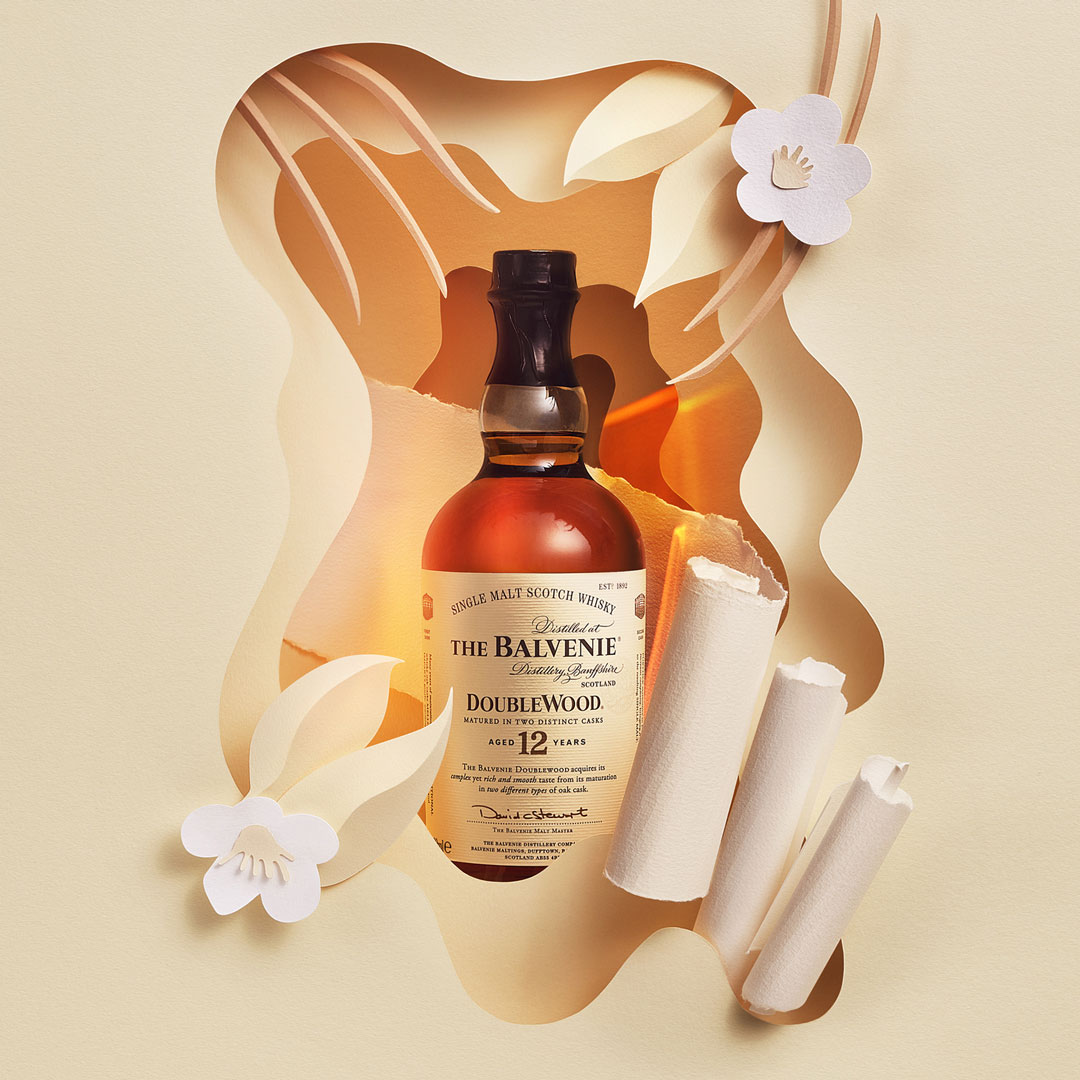 TASTE:
Smooth and mellow with nutty sweetness, cinnamon spiciness and a delicate layer of sherry

THE BALVENIE IS THE PERFECT GIFT

Rich in smooth notes of honey and vanilla, The Balvenie Double Wood single malt is a fine 12 year old whisky to be shared and enjoyed by seasoned and new whisky drinkers.

They recommend enjoying The Balvenie neat, on ice or with a dash of water. This will allow you to fully experience, savour and enjoy flavours and aromas.

Tea and whisky are both rooted in provenance and centuries of craftsmanship - each making them an excellent pairing. Making each requires years of dedication to hone the skill in achieving consistency and quality in every drop of liquid created. Nosing, tasting and sipping. 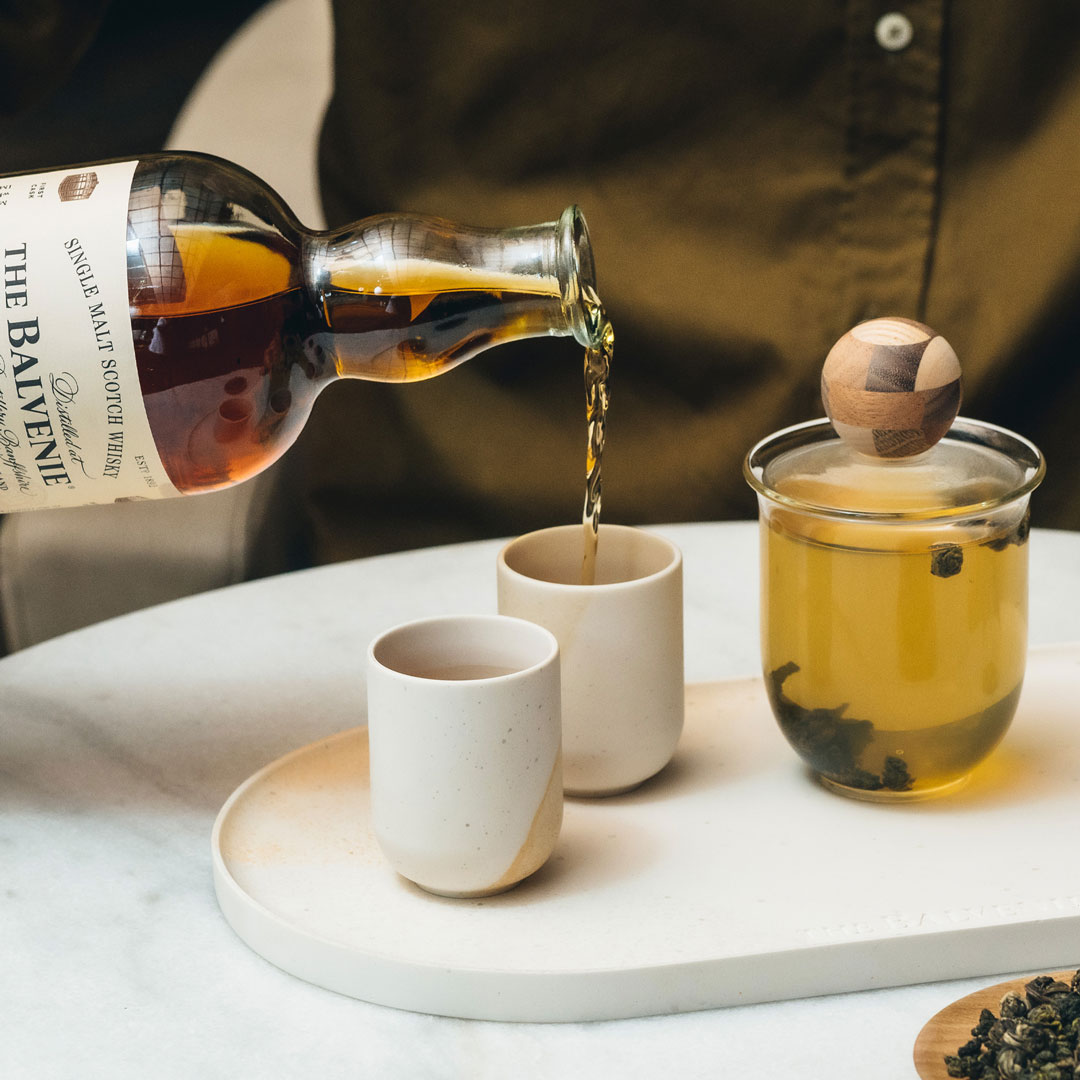 The Balvenie Caribbean Cask 14 year old single malt has been matured in traditional oak whisky casks for 14 years, it has then been 'finished' in casks that previously held Caribbean rum.

When he judged the casks to be ready, the rum was replaced with the 14 year old spirit and the wood was put to work adding the final touches.

The result is an exceptional single malt whisky with the traditional smooth, honeyed character of The Balvenie married with notes of toffee and a hint of fruit, with a warm, lingering finish. 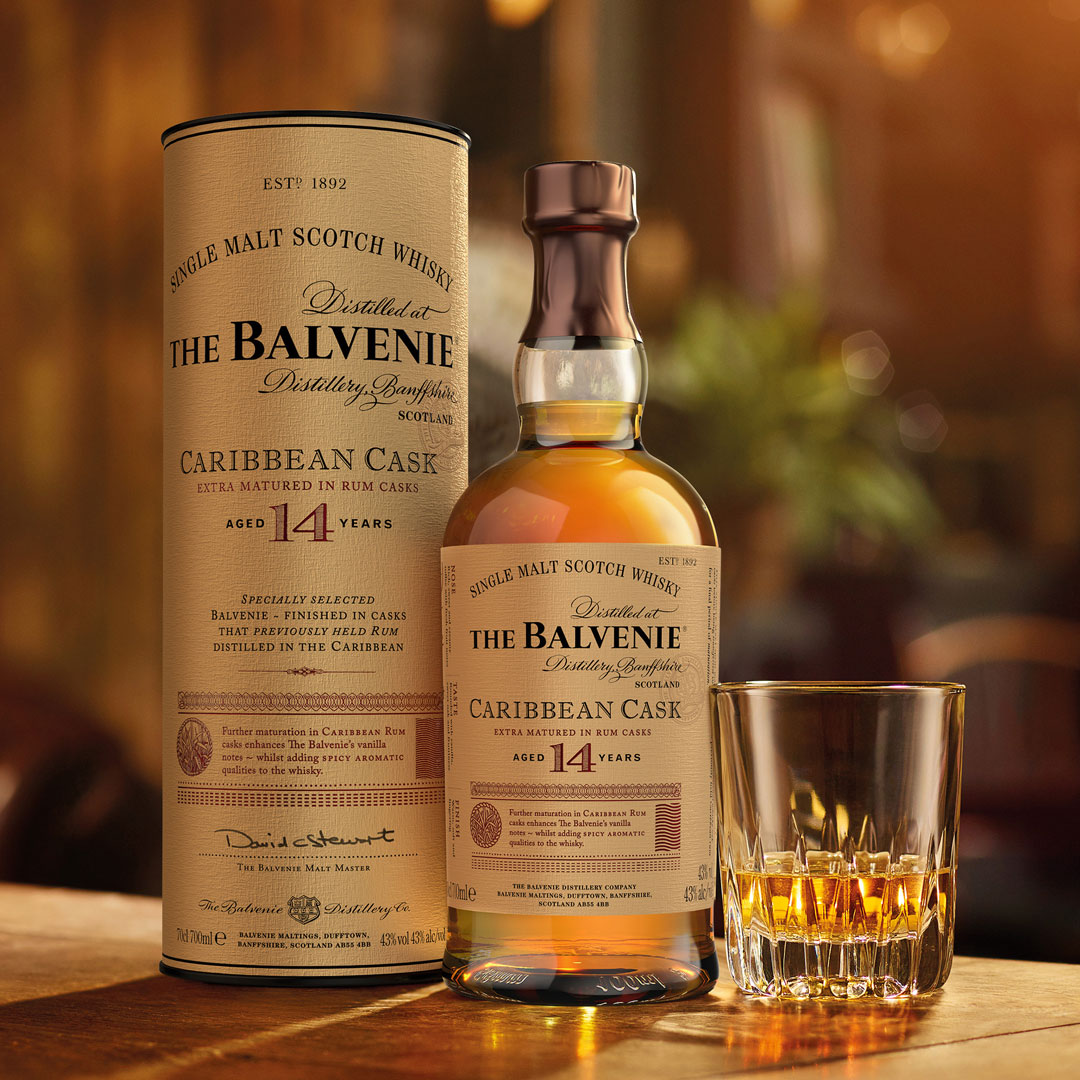 TASTE:
Rounded with vanilla and sweet oak notes, with a fruity character that develops with time.

To create The Balvenie Port Wood 21 year old single malt whisky, a marriage of rare Balvenie is transferred to port casks, or pipes, which have held fine port wines.

Here it is sampled regularly by The Balvenie Malt Master David C. Stewart MBE to ensure that just the right amount of character is imparted by the port casks, enhancing and developing the single malt whilst preserving its original characteristics.

Considered by many to be David's finest creation, this whisky is one of his proudest achievements and has won an array of highly coveted industry awards since its release in 1996.

With deeper vanilla notes, hints of green apple, creamy toffee and striking richness and complexity it is sure to be a hit with you too. 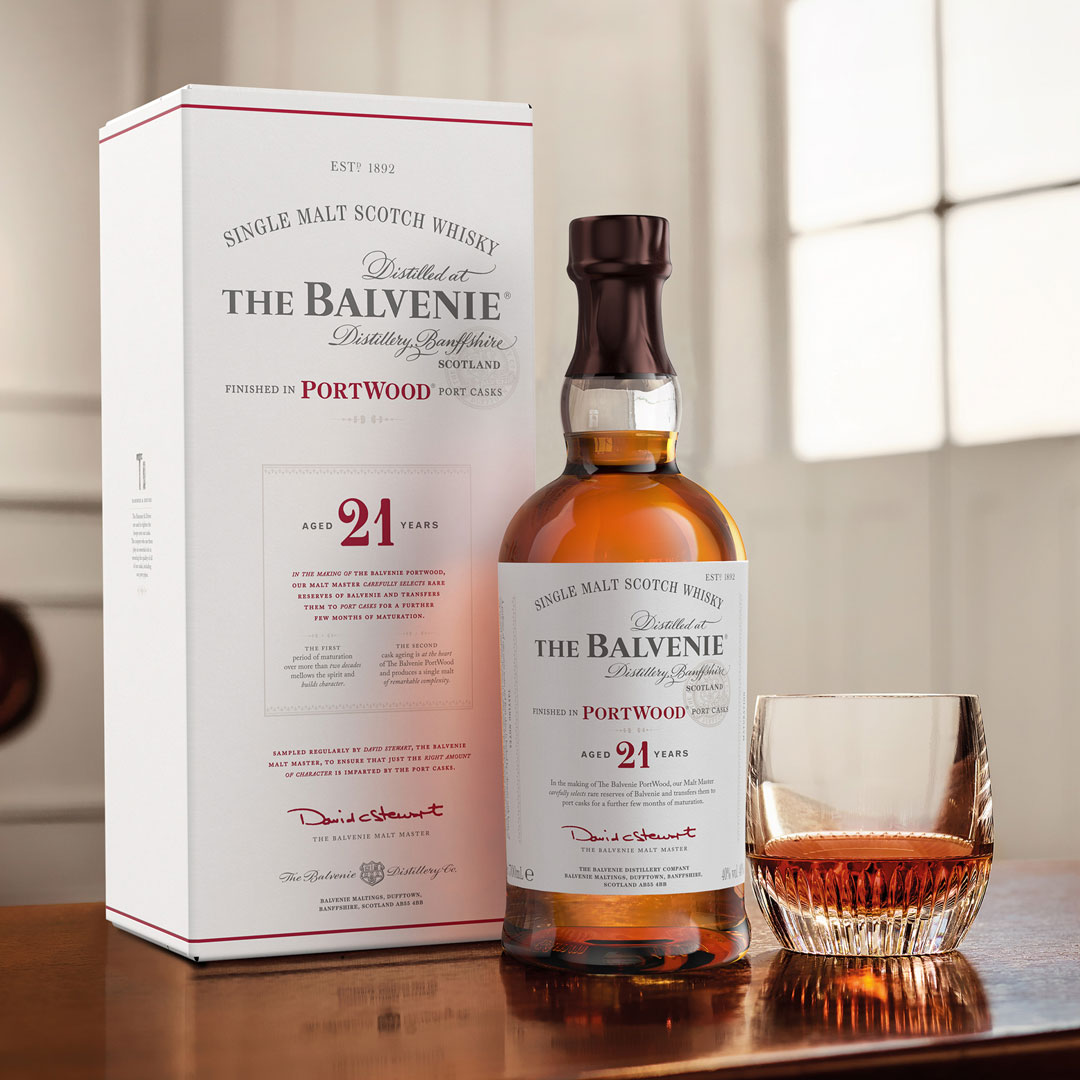 NOSE:
A perfume of fruity and ripe notes, backed by a nutty dryness.

TASTE:
Refined with remarkable character, it is creamy and silky with fruit, honey and spice notes.

Nestled in the picturesque surroundings of Dufftown, Speyside, The Balvenie distillery have been handcrafting whisky for more than 125 years, notably the most handcrafted of single malts.

Nowhere else can you find a distillery that grows its own barley, malts its own traditional floor maltings and still employs a team of coopers to tend to the casks alongside a coppersmith to maintain the stills.

With a team committed to ultimate craftsmanship, their dedicated characters pour their soul and obsession into every single bottle. This demonstrates that, whilst it takes skill to make something great, it takes true heart to make it extraordinary. And of course, Malt Master David C. Stewart MBE presides over the all-important maturation process.

Founded in 1892 by William Grant, The Balvenie Single Malt Scotch Whisky is produced by William Grant & Sons Ltd, an award-winning independent family-owned distiller and today run by his direct descendants. Each expression has a very individual taste, rich, luxuriously smooth and underpinned by the distinctively honeyed character of The Balvenie.

FUN FACTS ABOUT THE BALVENIE

David Stewart is the longest serving Malt Master in the Scotch whisky with almost 60 years experience in the industry. He started his journey at The Balvenie Distillery in 1962 at the age of 17 and completed a 12 year apprenticeship mastering the complex skills required to create the very finest Single Malt whisky. He was appointed as The Balvenie Malt Master in 1974, holding the title ever since. 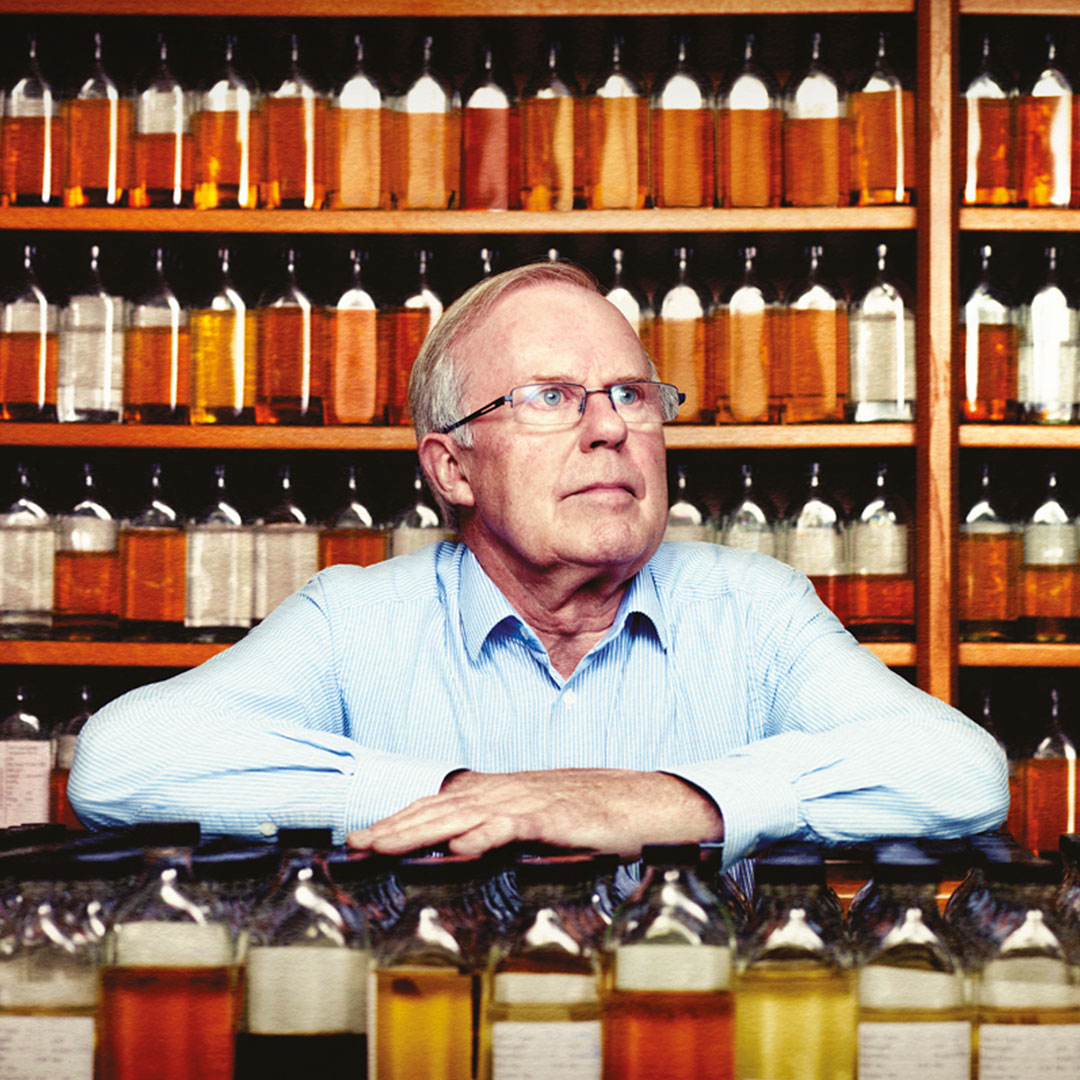 David’s dedication to his craft, coupled with his modest, unassuming manner has made him one of the best loved and most well-respected figures in whisky across the world. He continues to work with the skilled teams of craftspeople at The Balvenie Distillery in Dufftown, Speyside, Scotland to maintain quality and consistency in all bottlings. David’s list of pioneering achievements as The Balvenie Malt Master are expansive, but include the development of two cask finishing in 1983 which was unheard of in the industry at the time. This technique is now an established practice across the Scotch industry and widely enjoyed as The Balvenie DoubleWood 12-Year-Old: a signature whisky in The Balvenie’s core range today.

As Malt Master his passion for retaining tradition coupled with a spirit for experimentation, has helped to define The Balvenie as a refined and distinguished single malt. What makes this unique is that Balvenie has built a reputation of being loved equally amongst those new to whisky as well as the most seasoned of whisky aficionados. David is a guardian of ultimate craftsmanship and has nosed over 400,000 casks of Balvenie. On average he will nose around 30 whisky casks a day to find a balance of notes and consistent character. He decides which casks can be bottled after 12 years, what will be perfectly finished in fine oak, or what will go onto mature to become 21, 30 years old and beyond as part of Balvenie’s rare collections.

Over his career David has developed an award-winning range of single malt whiskies, which have earned him some of the industry’s top accolades and helped the independent, family-owned William Grant & Sons brand become Distiller of the Year an unprecedented five times by the International Spirits Challenge (ISC). Also, awarded Distiller of the Year four times by the International Wine and Spirit Competition (IWSC) and for the first time by the World Whiskies Awards in 2011.