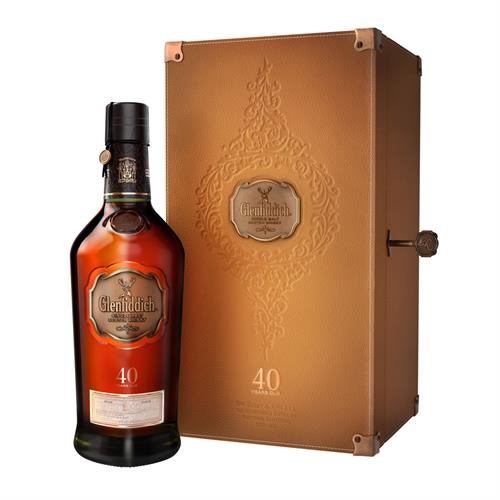 The Glenfiddich 40 Year Old is an exemplary single malt. The Malt Master handpicks some of the older casks in the world, marrying 4 year old vattings to craft a peerless whisky. The result is an infinite depth and layer upon layer of aroma and flavour from this 40 year old that is unrivaled by other rare whiskies of its age.

Each bottle is individually numbered and wrapped in hand stitched calf leather. Each is accompanied by leather bound book telling its 40 year old story, with certification and hand signed by the distilleries longest serving craftsmen. There are less than 1,000 bottles released each year and always eagerly awaited.

This 40 year old is not only precious but also a pioneering dram. Their Malt Master carefully hand selects individual casks before marrying them together with what was left over from the previous 40 year old vatting. This continuous process is known as 'remnant vatting' and contains whiskies that are at the very least 40 years old. Glenfiddich are the only single malt Scotch whisky in the industry who do this!