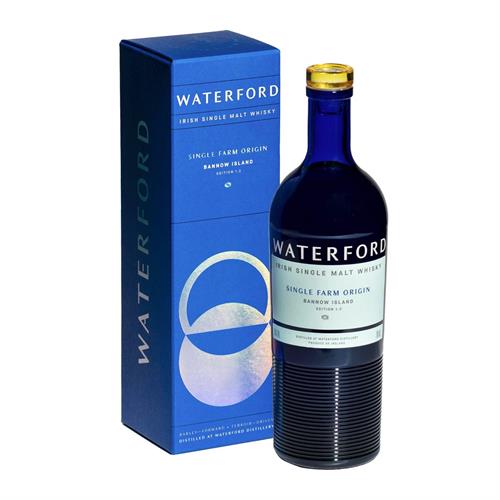 Bannow Island 1.2 follows on from the first release of this terroir exploration series.

This single malt is made with 100% barley grown on the Southern coast of County Wexford by Ed Harpur. Notes of pears, apples, vanilla and white grapes will be found throughout.

Barley is the source of malt whisky's complex flavours. Those flavours are shaped by the place where the barley grows, by the soils that nourish its roots, by the micro climate in which it ripes and by terroir.

There's been a brewery there on the banks of the River Suir since 1792. Today's Waterford Distiller, the technological marvel they call the Facilitator, enables them to create elite whisky. State of the art equipment marries with ancient knowledge, local Irish barley with extended fermentations, unhurried distillation with a spectrum of exceptional oak. Thus they can reveal the ultimate expression of terroir, farm by farm, harvest by harvest. Unique distillates, new starting points and beguiling expressions of place.

Each Single Farm Origin is a compelling and intriguing whisky, but also an intellectual challenge to the whisky world's status quo. Their radical, uncompromising philosophy allows inquisitive drinkers to join their exploration of the frontiers of authentic flavours, to search beyond conventions and to celebrate individuality. One place, one farm, at a time. 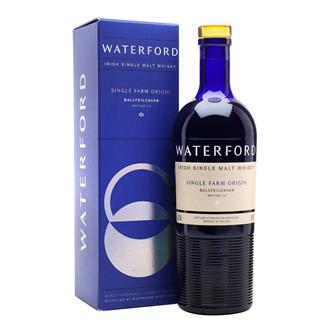 Ballykilcavan Edition 1.2 has been matured in a combination of French and American oak casks for 3 months longer than the initial release of 1.1. This single malt is made with 100% Taberna barley grown by David Walsh-Kemmis west of the Barrow in County