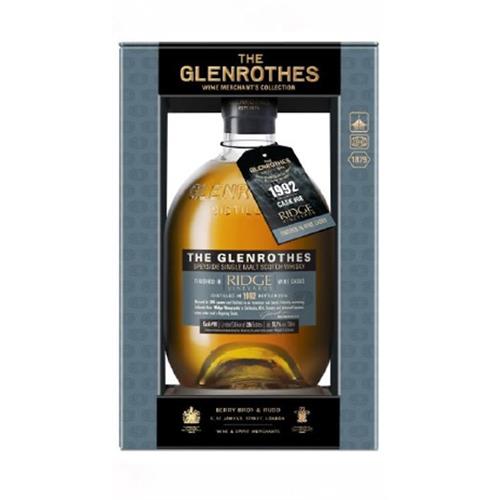 Having spent more than two decades in American oak, the Wine Merchant’s Collection whiskies have then been "finished" by introducing them into casks which formerly held some of the world’s most coveted wines.

This particular whisky was distilled in 1992, and matured until 2014 in Hogshead casks. Having rested in these casks, we then introduced it into an American oak barrel, formerly containing Zinfandel, from Ridge Vineyards, one of the leading lights of California’s wine scene, to add an extra layer of complexity to the spirit.

Ridge Vineyards is famed for producing fine wines that are every bit the equal – in both quality and desirability – of Bordeaux First Growths or Grand Cru Burgundy. Since winemaker Paul Draper’s appointment in the late-1960s, the estate has been at the vanguard of the Californian industry. When, less than a decade after his arrival, Draper’s wines saw off French competition at the now-notorious Judgement of Paris tasting, the estate shot to fame overnight. Its silky, smooth reds with fine tannins and glorious fruit have been in high demand ever since.

Our whisky experts kept a close eye on the spirit until, at last, it was judged to be perfectly balanced and mature – only then was it bottled.

Unchill-filtered, natural in colour and bottled at cask strength resulting in an intense, distinctive and unusual expression.

Creamy and balanced liquorice, winey notes and a lingering finish.