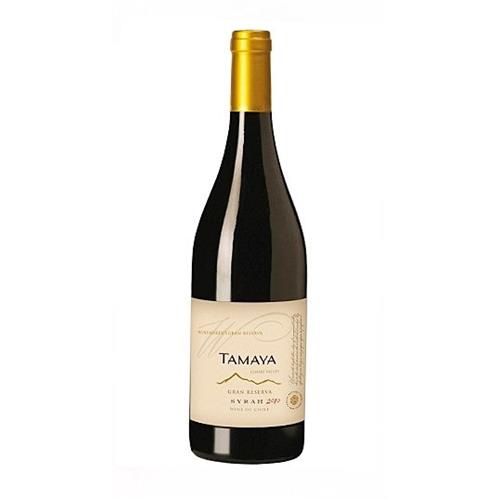 Deep and intense bluish purple.Smoky and spicy nose of fresh red fruits, licorice and flowers, meaty hints and complex toast.Powerful and lively, voluptuous but greatly structured by tights velvety tannins, the mouth impresses for its balanced power. Ends with the character of a great coastal syrah.
Coming from the 174 and 99 clones, the grapes were harvested by hand from the fourth week of April through the first week of May.
From the vineyard, they were carefully transported to the winery. Once there, the grapes were destemmed, gently crushed and sent
to a stainless steel vat for fermentation. After six days of pre-fermentation, selected yeasts were added. During the fermentation
process, which reached temperatures of 26-28C, the must (juice with grape skins) was macerated with aerated recycling gradually
moving the liquid from the bottom to the top of the vat 1.5 times until the fermentation process reached half the alcoholic volume.
The alcoholic fermentation was finalized by macerating the wine with the grape skins for one more week to achieve an improved
structure and more character. Next the wine was separated from the grape skins which were then pressed to yield a second fraction
of wine. After that, the wine was aged in barrels, where it remained for a period of 12 months. Finally, the wine in casks went through
a process of cold stabilization and then was gently filtered prior to bottling.

Vina Tamaya is located in the Limari Valley, just 400 kms north of Santiago, Chile and a mere 20 kms distantance from the Pacific Ocean. Limar Valley lies adjacent to the most arid desert in the world, The Atacama, but benefits from the cool sea breeze. They have succeeded in achieving a perfect equilibrium between the combination of its varietal grapes and the character of its land. Planting of the vines started in 1997, and the construction of the winery (with a capacity of 1,470,000 litres) began in 2001. The winemaker is Jos Pablo Martin, one of the most exciting young winemakers in Chile, who has worked with top Chilean and French producers. He has recently been joined by Felipe Solminihac, who will act as the consultant winemaker, bringing with him many years of winemaking skill and experience from around the world. The Reserva wines are perfectly balanced with an additional complexity, enhanced by careful ageing in French Oak casks. They are full bodied and well-structured with a long finish. Finally, the Winemakers Selection wines are made using only the finest grapes from the estate. We have selected four wines from their range which we think are at the cutting edge of modern Chilean wine and we recommend these wine to you.
The awards granted to our wines by the judges of the 9th AWoCa (Annual Wines of Chile Awards), were of special pride for us. The most prominent was our Winemaker Syrah Gran Reserva 2010, which was not only recognized as the best exponent of this variety, but also won the Best
in Show award, equivalent to being distinguished as the best Chilean wine in the show.