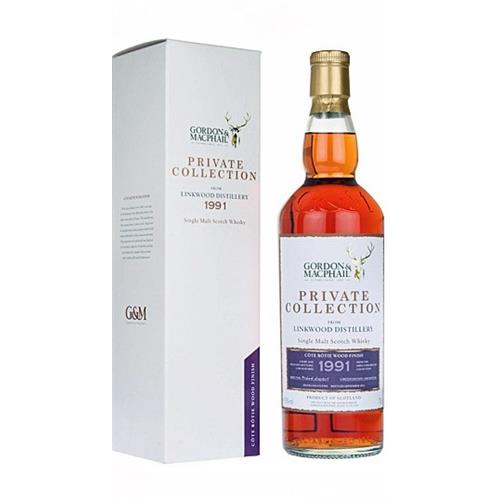 Notify me when this product is back in stock
Enter the ballot for Linkwood 1991 Cote Rotie Finish Private Collection G&M 45% 70cl
Limited stock
With vines planted over 2400 years ago by the Romans, Cte Rtie has some of the oldest vineyards in France. The translation, 'the roasted slope', refers to the long hours of sunlight that produce grapes which yield robust, full-bodied, richly coloured red wines. This expression of Linkwood was finished in Cte Rtie casks for 30 months and has developed rich, summer fruit aromas with vanilla and roasted malt notes.
AROMA without water Soft and ripe summer fruit notes initially, with a defined of sweet wine. Light hints of charred oak and a stewed plums edge.
TASTE without water Hints of cracked pepper with a raspberry edge. Warming and smooth with a burst of dark chocolate.
AROMA with water Sweet vanilla, with a freshly cut grass notes. Some citrus peel develops with a touch of aniseed and sweet wine influences linger.
TASTE with water Fresh, with a hint of gentle mixed spices. Some dark chocolate influences and a subtle burst of sweet wine.

The distillery was built in 1821 by Peter Brown, the factor of the Seafield Estates of Moray and Banffshire, and is named after Linkwood House, the family home. Brown's son, William, carried on the business and rebuilt the distillery in the 1870s. One of the managers in the 1930s believed that absolutely everything in the distillery played its part in making the whisky what it was and he commanded that nothing - not even a cobweb - be removed. Had he lived long enough, he would have been dismayed in 1962 when the internal layout was radically changed and again in 1971 when a second distilling unit with two pairs of stills was built alongside the original Linkwood single-pair set-up.