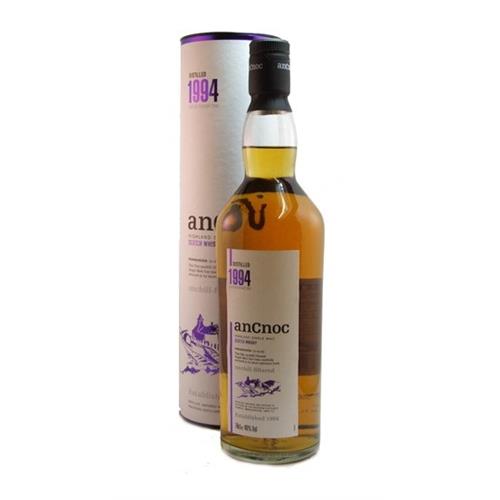 Notify me when this product is back in stock
Enter the ballot for An Cnoc 1996 46% 70cl
Limited stock
An Cnoc continues to flourish as a favourite of the whisky connoisseur given its quite unique characteristics. It is light yet complex, smooth yet challenging, with each twist and turn delivering a surprise.

An Cnoc 1996 has been bottled in its most natural form neither chill-filtered nor coloured, and as a result this Vintage may develop a light haze with the addition of water or if kept at a cold temperature. This haze is a natural characteristic of whisky that is unchill-filtered.

Nose Medium to high intensity. Slightly woody with hints of vanilla and toffee.

Taste Full-bodied, slight peatiness with fruity overtones.
Production of anCnoc began at the Knockdhu Distillery in 1894 following the discovery of several springs of the purest, crystal clear water on the southern slopes of Knock Hill. At this time two pot stills could turn out 2500 gallons of spirit per week, motive power being supplied by a 16hp steam engine. Cottages were built for the workers and their families, creating a new community around the Distillery. Much has been done to modernise buildings and machinery, but very little has changed in the distillation process. The two originally designed pot stills remain, giving Knockdhu the same traditional, distinctive flavour as was first tasted more than 100 years ago.

It has a soft, aromatic nose with a hint of honey and lemon in the foreground. It has an immediately recognisable amber colour and is sweet to taste followed by a fresh appetising fruitiness and a long smooth finish.

Knockdhu Distillery nestles under the dark 'Knock Hill', known to the local villagers by its Gaelic name of 'Cnoc Dubh', which provides the source of the pure clear spring water for the malt. At certain times of the year, the hill appears black when seen from the distance, the heather is magically transformed by the soft light, wind and weather. Hence the name Knockdhu from the Gaelic Cnoc Dhubh meaning 'black hill'.